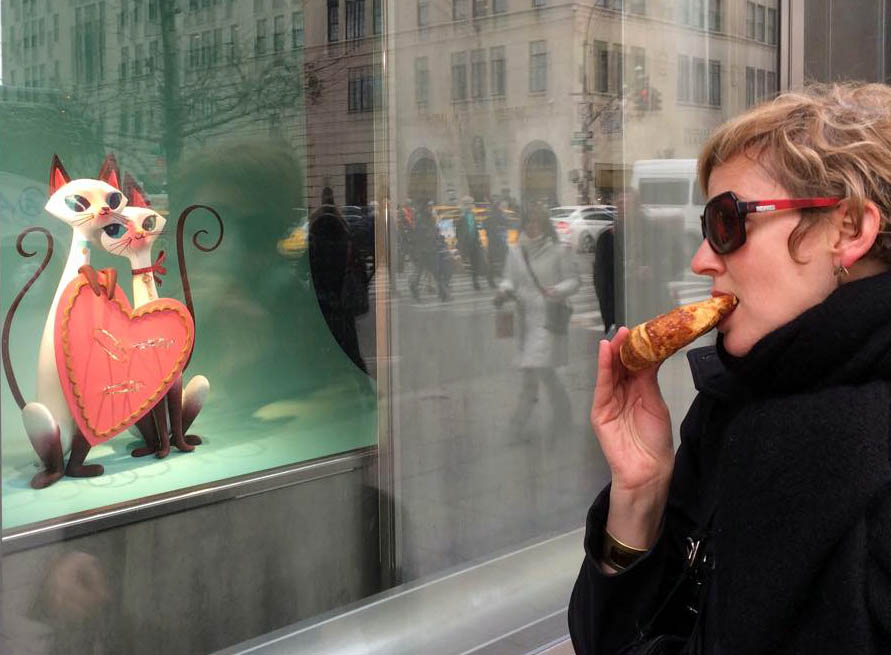 Jennifer K. Stuller is a rebellion built on hope.

Even if Jennifer K. Stuller’s given name wasn’t an homage to Vanessa Redgrave’s Guenevere in 1967’s Camelot, she nevertheless would have been forged from the pop culture of the late twentieth century.

Superhero television of the 1970s taught her compassion is the ultimate superpower. Adventure films in the 1980s demonstrated that possibility is the eternal fuel of human spirit. Gen X staples of the 1990s teenager kept her, to quote an icon, “strange and unusual.”

When, in 1989, her father (who affectionately called her “Grasshopper”) gifted his first-born a copy of Ms. Magazine, it was Jen’s Excalibur. Pop culture and politics would be forever entwined in her quests.

Today, Jen is a respected and sought-after feminist pop culture historian and media critic. As a professional writer she has contributed to web and print based publications including the BBC, Bitch Media, and Geek Monthly. As a public speaker, Jen brings her illuminating, insightful, and often playful voice to audiences in the United States and internationally. From coffee houses to Comic-Cons, libraries and classrooms to Town Halls, museums, and even the United Nations, she is a featured speaker, panel organizer and contributor, conversation moderator, and interviewer.

In her book Ink-Stained Amazons and Cinematic Warriors: Superwomen in Modern Mythology, Jen presents an exploration of the journey of the female hero in comics, film, and television, as well as a call to action for creating stories with complex women at their center. As the editor of Fan Phenomena and Buffy the Vampire Slayer, Jen embraces two of her passions: Buffy the Vampire Slayer and the creative endeavors of fan communities.

Jen is co-founder, founding director of programming, and former Board President of GeekGirlCon—an organization that celebrates and honors the legacy of women and girls in the fields of STEAM (Science, Technology, Engineering, Art, and Math), comics, science-fiction, arts, and literature, game play and game design. Founded in 2010, GeekGirlCon has connected thousands of women and allies in geek culture in friendship, unapologetic nerdiness, and career and mentoring opportunities.

As a thought leader, Jen has been interviewed by numerous publications about geek culture and women in media including The Seattle Times, Seattle Weekly, The Mary Sue, Legion of Leia, and Bitch Media. Her expert opinion and interviews extend across radio, documentaries, podcasts, and news media including the Australian Broadcasting Corporation’s Radio National Breakfast show; KUOW’s The Conversation and The Record; and WNYC’s The Takeaway. She was a featured talking head in the 2012 documentary, Wonder Women! The Untold Story of American Superheroines. She can be seen in the AMC documentary series Robert Kirkman’s Secret History of Comics.

Jen’s passion for popular culture, geek culture, and feminist politics have led to collaborations with the Museum of Pop Culture, the Seattle International Film Festival, the Comics Arts Conference, Whedon Studies Association, Humanities Washington, and more. She is currently working on projects exploring the evolution of geek culture and how geeks are hacking popular culture for social change, as well as the story of how geek girls came together to radically transform nerd culture – for the better.

Born and raised in the San Francisco Bay Area, Jennifer moved to Seattle in 1997. She is married to Ryan Wilkerson, Vice President, Experience Design at HBO Seattle. They live with their two Maltese, Giles and Wesley.

Jen is a rebellion built on hope, and has vowed to use her powers only for good. Visit Geektivism.com and sign up to receive updates on how to be part of her latest adventure.

Bio to Copy and Paste

Jennifer K. Stuller is a writer, media critic, and feminist pop culture historian specializing in female super and action heroes, the vibrant history of geek girl culture, and geek activism. She is the author of Ink-Stained Amazons and Cinematic Warriors: Superwomen in Modern Mythology, and the editor of Fan Phenomena: Buffy the Vampire Slayer. She has been published in BBC News, Bitch Media, and Geek Monthly. Additionally, Jen is Co-Founder and former Board President of GeekGirlCon. A sought-after speaker, she engages audiences with lively, multi-media, conversations that trace the ways communities, shared stories, changing social mores and political climates interact and can be channeled for leadership, understanding, and social change. She has introduced the concept of positive fandom to a variety of audiences, and speaks about geek culture and activism at conferences, libraries, and schools in the US and internationally. Jen is a rebellion built on hope, and has vowed to use her powers only for good.

Grew up by the City by the Bay. Moved to Seattle in the 1990s. (Who didn’t?!?) Made a home in the Emerald City; Studied in the Comparative History of Ideas; Co-Founded GeekGirlCon; Contracted and/or collaborated with Humanities Washington, SIFF, MoPOP, Comics Arts Conference, The Whedon Studies Association

Gets Giddy Talking About:

A farmers market; A visit to Manhattan; An overnight stop in Ashland, Oregon; Fresh, briny, oysters; Record Store Day; Theater screenings of Xanadu; A nap with my doggies

The Three (Okay, Four) Fictional Characters I’d Use to Describe Myself:

Push out the jive and bring in the love.
—Wise words from C. Montgomery Burns Check out what people are saying about Jennifer and her work!