Contact her for writing, editing, project management, and consulting rates. As with most cult phenomena loved long after its debut, no one could have predicted the enduring affection inspired by Joss Whedon’s television series, Buffy the Vampire Slayer. Its use of smart, funny, and emotionally resonant narrative, subversive and feminist characterizations, and unique approaches to television as an art form render it a source of inspiration for fans both existing and newly introduced. Fans create meaning by building on existing narratives through such ‘phenomena’ as fan fiction, media manipulation, and performance. They voice concerns, express and celebrate fandom, and create transformational communities not unlike Buffy’s Scoobies themselves. Learn more 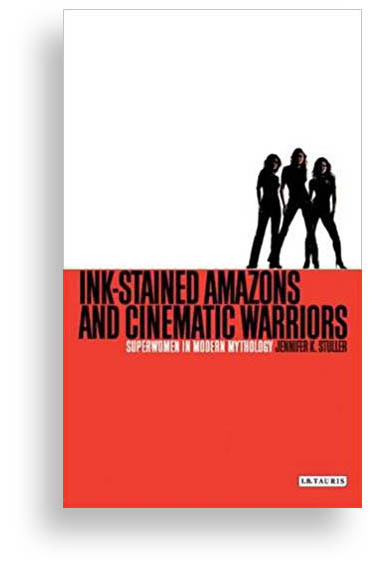 From Wonder Woman to Buffy Summers, Emma Peel to Sydney Bristow, Charlie’s Angels to The Powerpuff Girls, Superwomen are more than just love interests or sidekicks who stand by their Supermen. Ink-Stained Amazons and Cinematic Warriors: Superwomen in Modern Mythology shows how the female hero in modern mythology has broken through the boy’s club barrier of tradition and reveals the pivotal role of high-heeled crimefighters in popular culture. Featuring spies and sexuality, daddy’s girls and super-mothers, this is a comprehensive, engaging and thought-provoking guide to female detectives, meta-humans and action heroines, as well as their creators, directors, performers, and consumers. The book also includes a glossary of modern mythic women, from Aeon to Zoë, as well as a foreword by acclaimed cultural commentator Roz Kaveney, author of Superheroes! Capes and Crusaders in Comics and Films. Learn more

Chapter 1 of Ink-Stained Amazons: Superwomen in Modern Mythology, “The Birth of Modern Mythology and the Mother of Female Superheroes” was translated into German and included in this reader.

“Love Will Bring You to Your Gift: On Redemption, Collaboration, and Compassion,”

“What Is a (Female) Superhero?”

“Second Wave Feminism in the Pages of Lois Lane.”

“Leveling Up: Geek Woman Are Connecting Like Never Before.”

Bitch Magazine, Winter 2015.
Geek women, nerds, and fans have long existed as consumers and creators of geek culture. And now, thanks to the Internet, they’re creating new alliances like never before. Jennifer K. Stuller reports on geek feminism and the rise of the fangirl.

“T is for Michael Tree”

Bitch Magazine, The Noir Issue, Winter 2009
Darkness is defined in this Lexicon of Noir in which, Ms. Stuller contributed entries for Ms. Tree and Honey West.

“Queen of the Hill”

“Operation: You Only Live Twice.”

Geek Monthly, November 2006.
In the centenary of Ian Fleming’s birth, a geek couple lives it up Bond-style in Tokyo and London. They document their adventures so that you, too, can follow in the footsteps of 007.

Washington CEO, December 2005.
Relaxing with Scotch and cigars in Seattle and beyond.

How to Get Pumped for a Wonder Woman Workout

DC Universe, 17 September 2018
About to take on a big challenge? A test of strength — physical, mental, or emotional? This motivational mix tape of music, gear, and story will get you ready to unleash hell.

“The Joy of Female Power.”

Bitch Media, 6 March 2017.
In honor of the 20th anniversary of Buffy the Vampire Slayer, Bitch featured three writers offering their perspective on how Buffy impacted their feminism and perspectives in “20 Years of Buffy: Love Letters to the Vampire Slayer,” in tribute to the show that taught a generation to slay the monsters, embrace their dark complexities, and find their superhero strength.

Bitch Media, 8 July 2016.
This essay explores what we mean when we use the phrase “strong female character,” and how that should really translate to diverse and complex female characters.

“International Women’s Day: Why women can thrive in sci-fi.”